Then your online searches end here.

The faculty of Arts is one of the Thirteen (13) faculties in the University of Benin and it is made up of six department,
it’s departments are spread across two main campuses, one at Ekenwa, while the other at Ugbowo, both in Benin City.

The academic programme which provides for single honour B.A degree is designed to cater for diverse academic and creative interests of students and to prepare them for various professional and administrative job opportunities. 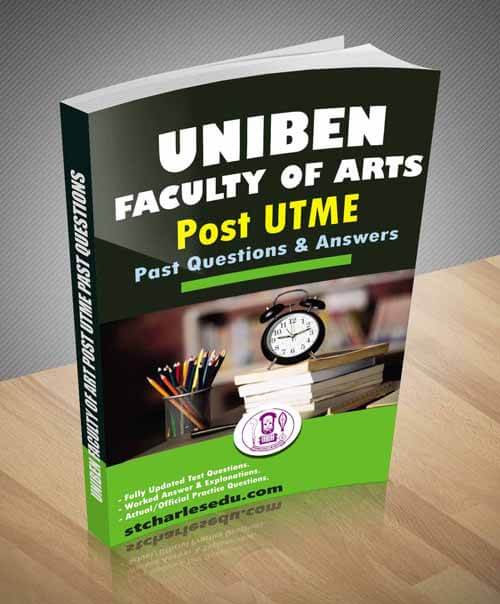 How to Get UNIBEN Post UTME Past Questions and Answers for Arts Courses.

Call or whatsapp us on 08051311885 for the account number to make payment and how to received your complete copy of the past questions to be sent directly to your email address or whatsapp number.

After Payment, send us the following
Depositor Name:
Name of Product Paid for:
Valid email address.

DELIVERY ASSURANCE
We will deliver the past question to you 10 mins after confirmation of payment to the email you will send to us.

Questions 1-6 are based on Hamlet.
Read the passage below carefully and answer the questions that follow.

Good Hamlet, cast thy nighted colour off, and let thine eyes look like a friend in Denmark. Do not for ever with thy vailed lids, seek for thy noble father in the dust. Thou know’st ‘tis common – all that lives must die. Passing through nature to eternity [Act I Scene I]

1. Who is the speaker of the above excerpt?

3. Is it correct to say that “nighted colour” means
A. metaphor
B. simile
C. metonymy
D. bathos

___I do wish that your beauties be the happy cause of hamlet’s wildness. So I shall hope your virtue will bring him to wonted way again. To both your honours [Act 3 Scene 1]

6. Hamlet’s “wonted way” means his
A. usual way of life
B. silent ways of doing things
C. economical use of money
D. manner of writing to many friends

7. Identify the odd item in the following list
A. Prose
B. Catastrophe
C. Poetry
D. Drama

8. An epilogue in a play refers to the
A. conflict in the play
B. Tail-piece
C. Opening chorus
D. Dramatic action

10. A poem of mourning and dedication written on the death of an individual is called
A. an allergy
B. an elegy
C. a sonnet
D. an ode

11. Any work of literature which sets out to instruct may be called
A. Dialectic
B. Didactic
C. Definitive
D. Decadent

12. A quatrain is
A. the last line in a poem
B. the fourth line of a sonnet
C. a poem which ends with a question
D. a stanza

13. In Literature, a round character is associated with
A. change and growth
B. stability and determination
C. simplicity and modesty
D. running down other characters

14. The antagonist in a tragedy is
A. any character in the tragedy
B. the wife of the protagonist
C. the character provides comic relief
D. the character that acts in opposition to the main character

15. A statement that appears to say something opposite to common sense or the truth, but which may contain truth is
A. an oxymoron
B. a paradox
C. an irony
D. a parable

16. The substitution of a mild and pleasant expression for a harsh and blunt one is called
A. Ambiguity
B. Climax
C. Peripety
D. Euphemism

17. In literary criticism the vocabulary or language used by the writer is generally known as
A. Diction
B. Figure of speech
C. Characterization
D. Rhythms

18. An allegory is a story
A. in which people or things or events have another meaning
B. which aims at teaching a moral lesson
C. told in verse
D. in which allegations are made about the characters

Read the following poem carefully and answer the questions that follow.
Love you my gentle one, my love in the fresh milk in the runbindl,
Which you drink on the wedding day. My love is the butter we were smeared with,
To seal the fidelity into our hearts. You are the cattle-bird’s egg,
For those who say you are wealthy,
You are the papyrus reed of the Lake, Which they pull out with both hands.
And I sing for you with tears, Because you possess my heart, I love you gentle one.

20. The predominant literary device used in the extract is
A. Hyperbole
B. Epigram
C. Oxymoron
D. Apostrophe

21. The underlined expression contains a
A. simile
B. metaphor
C. personification
D. litotes

22. The poem is a blank verse because
A. there is no rhyme
B. there is rhyme
C. the rhyme is alternate
D. it contains couplets

23. The feeling of the poem is one of
A. anxiety
B. gaiety
C. sadness
D. frustration

25. The expression “the sun kisses the earth” is a
A. simile
B. metaphor
C. personification
D. paradox

26. An overused expression is a
A. a cliche
B. a cacophony
C. an epigram
D. an archetype

27. What basically distinguishes Literature from other disciplines is its
A. use of creative imagination
B. exposition of human experiences
C. communication of ideas
D. portrayal of places

28. A story that explains the origin of a natural phenomenon is a
A. notion
B. legend
C. parable
D. myth

29. The oldest bronze in West Africa are found in
A. Ife
B. Benin
C. Igbo Ukwu
D. Jos

30. According to tradition, the prince who founded the Nupe Kingdom came from
A. Bida
B. Biron
C. Igala
D. Idoma

32. The Oyomesi was
A. the council of elders
B. the official in charge of commerce
C. the Minister of the interior
D. the Supreme Council of the Oyo Empire

34. One of the factors that determine legitimacy is
A. Strong defense
B. public opinion
C. level of literacy
D. foreign policy objective

35. One of the following characteristics of constitutional monarchy is that

A. Power is invested in one person who controls the legislature, the executive, and judiciary
B. He is not controlled
C. His will become laws of the land
D. the monarch is guided by the rule of law

36. Which of the following European countries was the first to explore African coastland?
A. Spain
B. Portugal
C. Italy
D. France

38. Which of these oracles enabled a section of the Igbo people to establish commercial domination over their immediate neighbours?
A. Ogbunorie oracle of Ezimoha
B. Ibini Ukpabi of Arochukwu
C. Igwe ka ala of Umuoha
D. Agbala of Awka

41. Which of the following was responsible for the decline and fall of the Oyo Empire?
A. the empire had a strong central government
B. The introduction of horse into Oyo
C. The aura of greatness of the empire
D. the vastness of the empire